Overview Discussion Reviews Updates Materials
We are not an official Minecraft product and are not approved by or associated with Mojang
To get license key, please contact us on discord: https://mc-protection.eu/discord. We answer under 30min.
AEGIS
NEW ERA OF BOTS & EXPLOIT DETECTION, PROTECTION THAT YOU ALWAYS DREAMED ABOUT.
Aegis is the most powerful and advanced bungeecord fork you could ever hear about.

Why you should choose us?
I'm a professional software developer with 4 years experience. In the past I was doing "stress/crash/exploit" similar tools, so I know exactly how to prevent them. I also own 4 big minecraft servers, very popular in my country and none of them has been ever crashed.
Also, I have a lot of polish friends that also own big minecraft servers (1,000 - 5,000 players networks) and they are also using Aegis.

It is the best solution against bot, crash and exploit attacks. Including ping attacks, bungee smashers, null pings, slow bots, AI bots and much more.
Our AntiBot blocks every type of bot attacks. Player has to pass a few "login checks" and if we detect an attack, then he has to pass "falling & captcha test" which is 99% impossible for bots. Of course that "captcha thing" happens in our fake-server which is based cached-system which makes it powerfully optimized, efficient and can keep THOUSANDS of bots. (Every bot is disconnected in 30s if he does not pass tests). I have never met a guy that could crash or lag any of my minecraft server and I have 4 of them for about year. In total I have about 1500 players.

Our AntiCrash blocks:
Our powerful IPTables & IPSet integration blocks A LOT of bots, floods & crash attacks even before they go to BungeeCord which optimizes your CPU & RAM usage A LOT. Of course you don't have to use them and it will be still blocked by a lot of other checks!

- Aegis is much better than any plugin. It works above firing any login events which powerfully optimizes your server and cpu.

- Aegis has powerful cache system which means we do not reinvent the wheel.. We save the most important and used packet in cache system on start-up and we use just use it instead of creating the packets everytime new players joins..

- Our test-server is uncrashable

Very cool design of Aegis "Escanor" version, used by my own server and one, big mc network with 4,000players:


How is that possible?

- Our amazing IPSet and IPTables blocks a lot of connections even before it goes to BungeeCord which is... very good, it reduces bungee cpu usage. It was tested with MCSpam, MCDrop, MCRage (bot/stress websites) and everything is blocked, very good plans on these websites costs 40$, we tested every plan and method . During every type of attack every REAL/LEGIT player can join softly, without any lag etc. just like the attack would not ever happened, the best thing is.. even console is very clean, just like attack would not even happen! Aegis is almost 100% configurable, you can edit every message, checks etc.

How is that possible Aegis is so good? It's simple. It's bungeecord fork, we can do almost everything in there. About 8 login and ping checks before logging.. About 5 checks in-game (falling + captcha test during bot attack, ping check and much more). Falling & captcha test (it is required only once from player to pass these tests) can keep THOUSANDS players in fake-server that Aegis creates to verify them, that all thanks to the cache system. So even if bots go through login and ping checks they have to pass "falling & captcha" test which is IMPOSSIBLE.

Aegis is much better than any AntiBot plugin, I guarantee it. Servers with more than even 10k players are using Aegis - if you wanna get ips of these servers then just send me private message on discord.

In Aegis.zip you can find configs for: German, Russian, Hungarian, Italian, Polish, Czech, Danish, Turkish - we have a lot of translations, everything explained very well, you can configure everything!

AUTH-SYSTEM AND ANTI-VPN
Aegis contains also AntiVPN and Auth-System which you can disable if you don't want. You can also disable our AntiBot if you want AntiCrash only. Everything is configurable.

Auth-System is replacement of AuthMe and FastLogin or other "Authentication" plugins. It forces cracked players to create accounts with /register and /login, but.. Premium players are logged automatically without creating an account which is great! This feature is used by a lot of servers. You don't need 2 bungeecords anymore, like play.server.com and premium.server.com for cracked and premium players! They can be on ONE bungeecord without any issues!

AntiVPN verifies players in empty-world for a few seconds, only once. It is much better than freezing on "Logging in..." screen + we use AntiVPN verification only when player passes AntiBot tests which is great and do not flood AntiVPN/Proxy websites (api). We also have GeoIP checks which you can enable and use!

You can even set clean-console to true, and your console will be much cleaner and attacks will not make your console look awful!

Contact:
Our test server: hubplay.pl (my own server with 500+ players)
(feel very free to test your bots & crashers there) 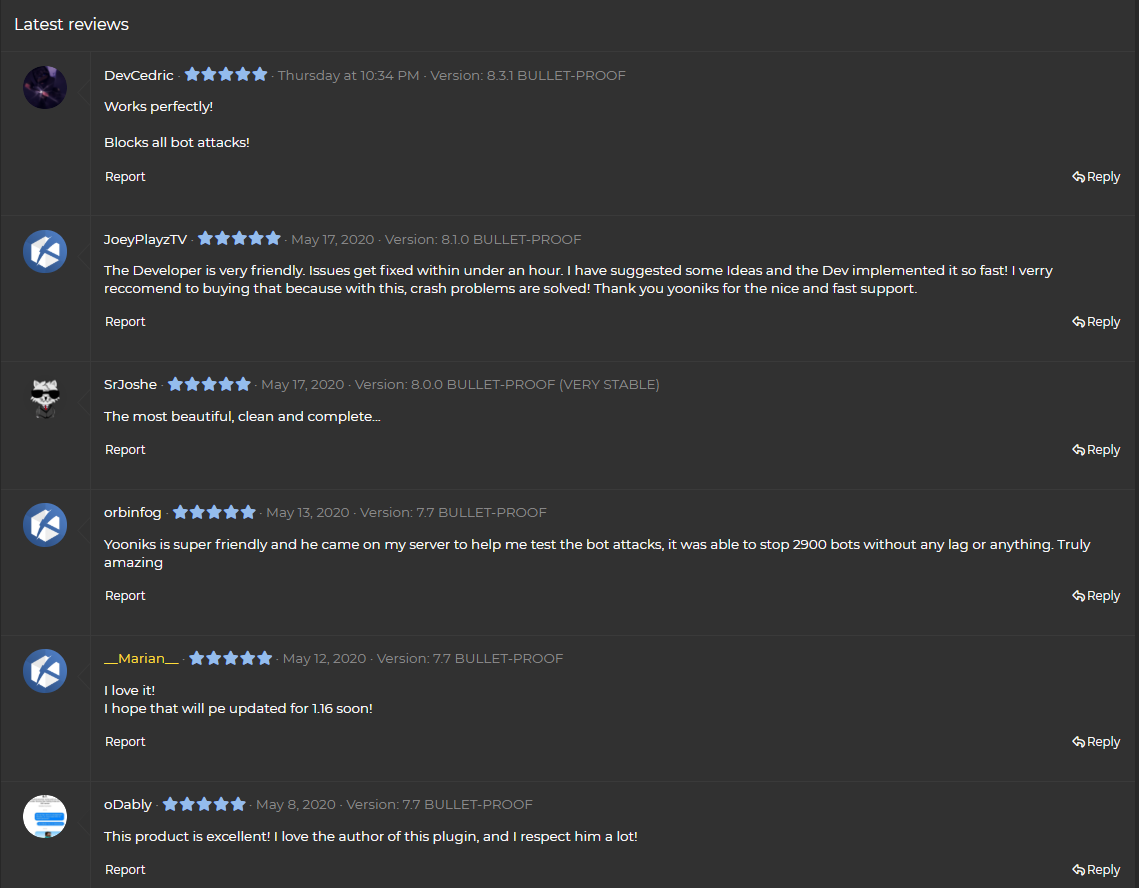 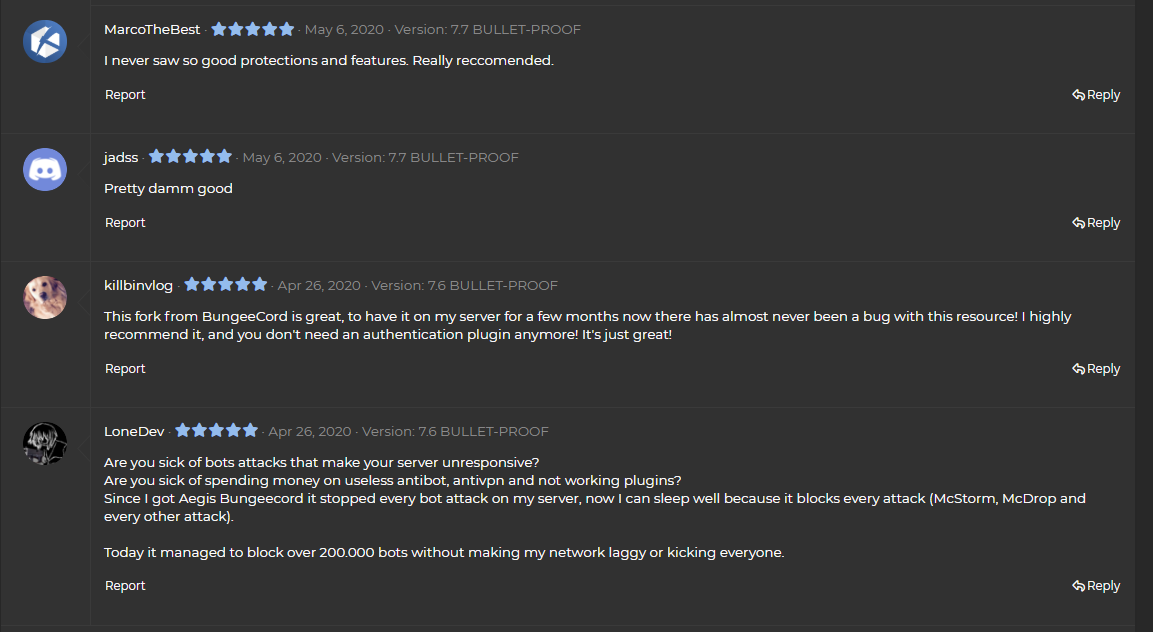 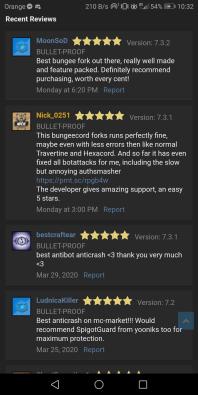 Author's response
It has, but we mainly update it on our own website, polymart is just additional 'market'. I'm updating it right now on polymart.