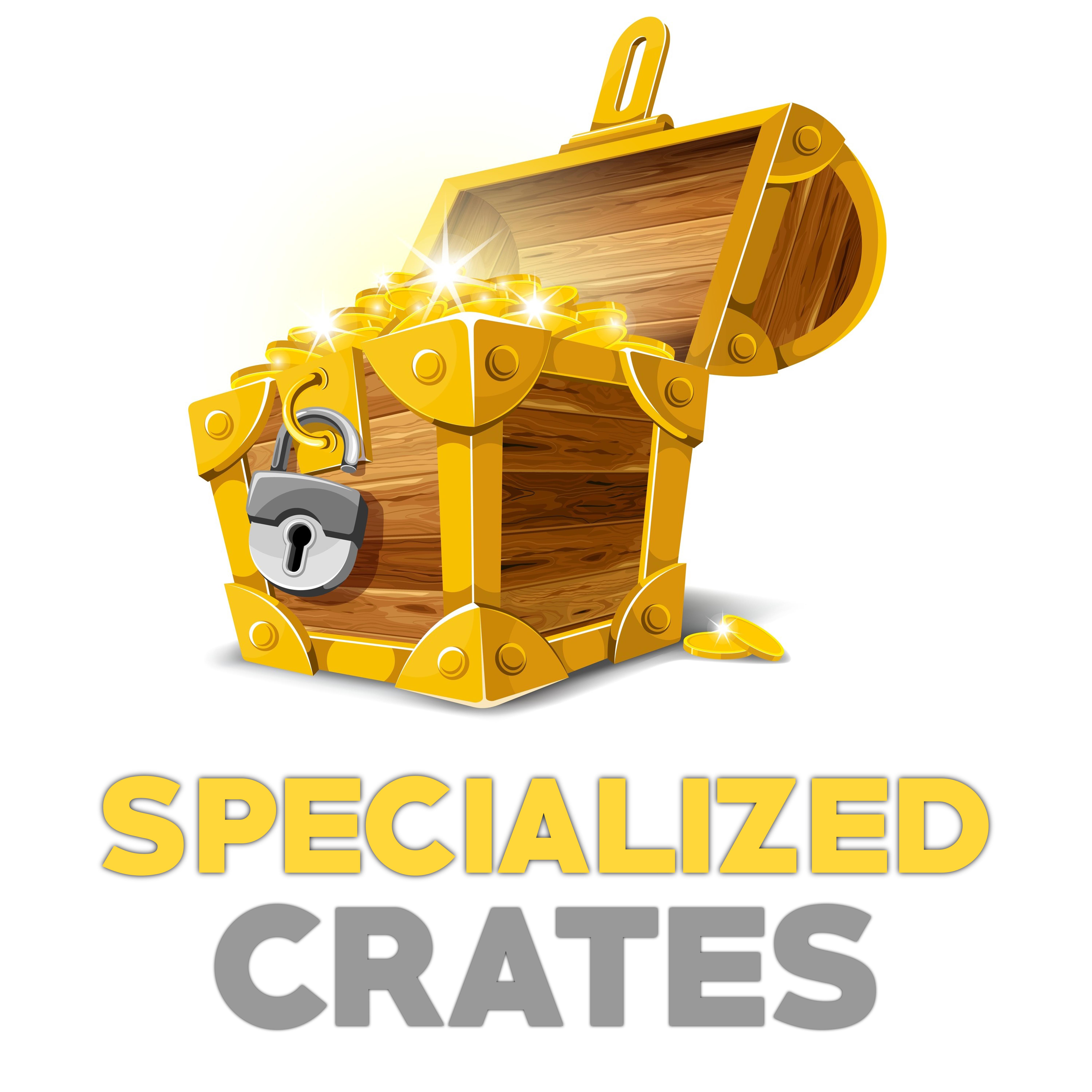 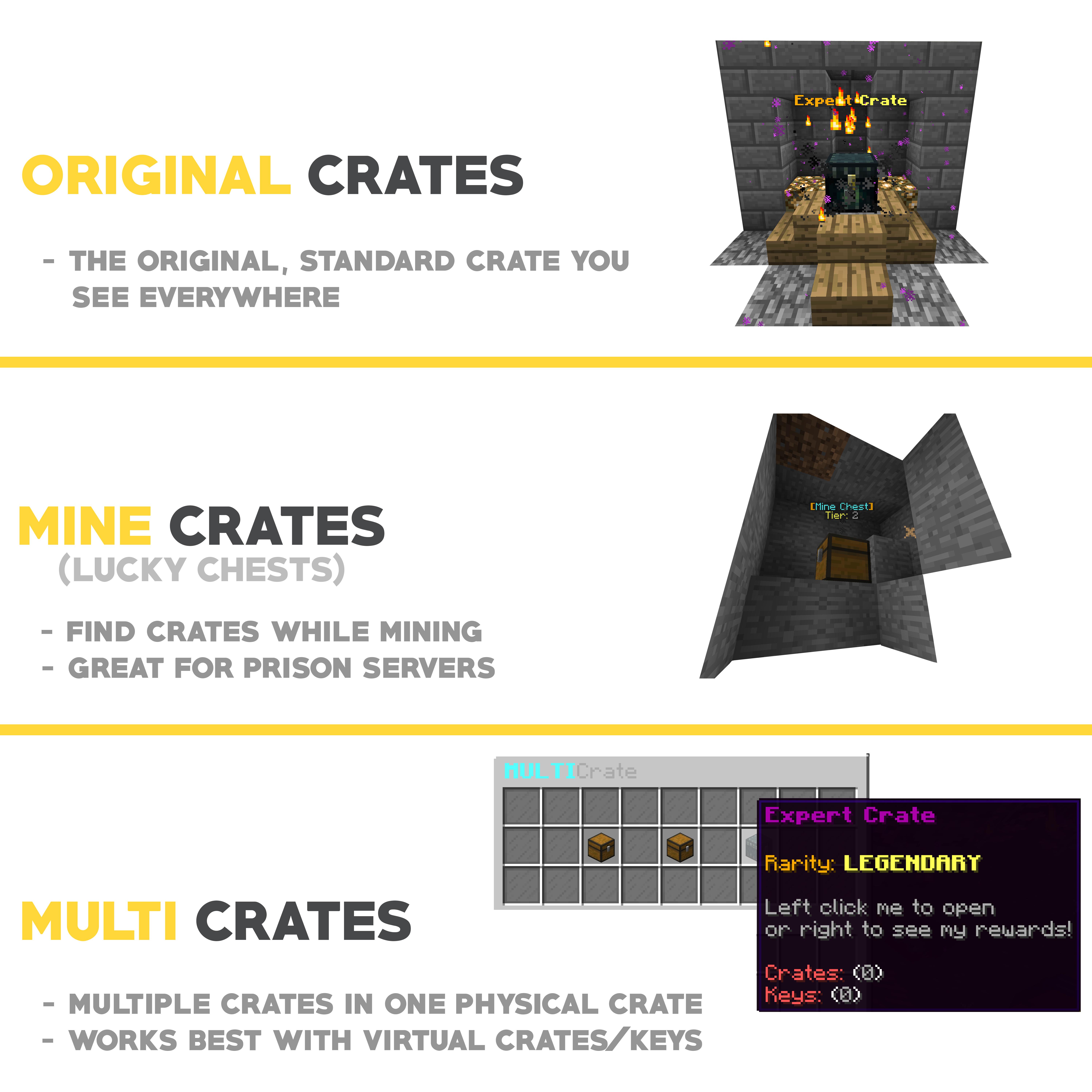 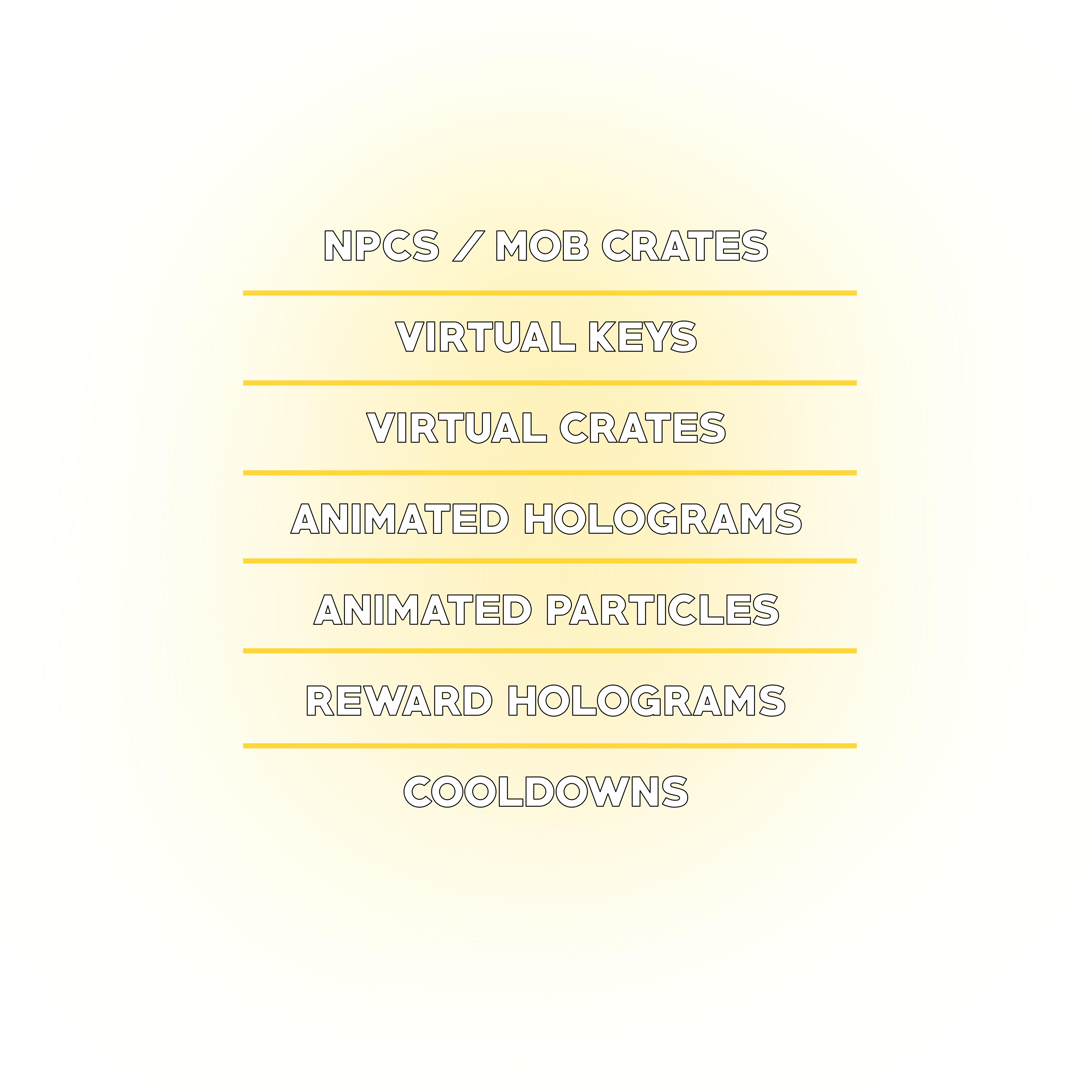 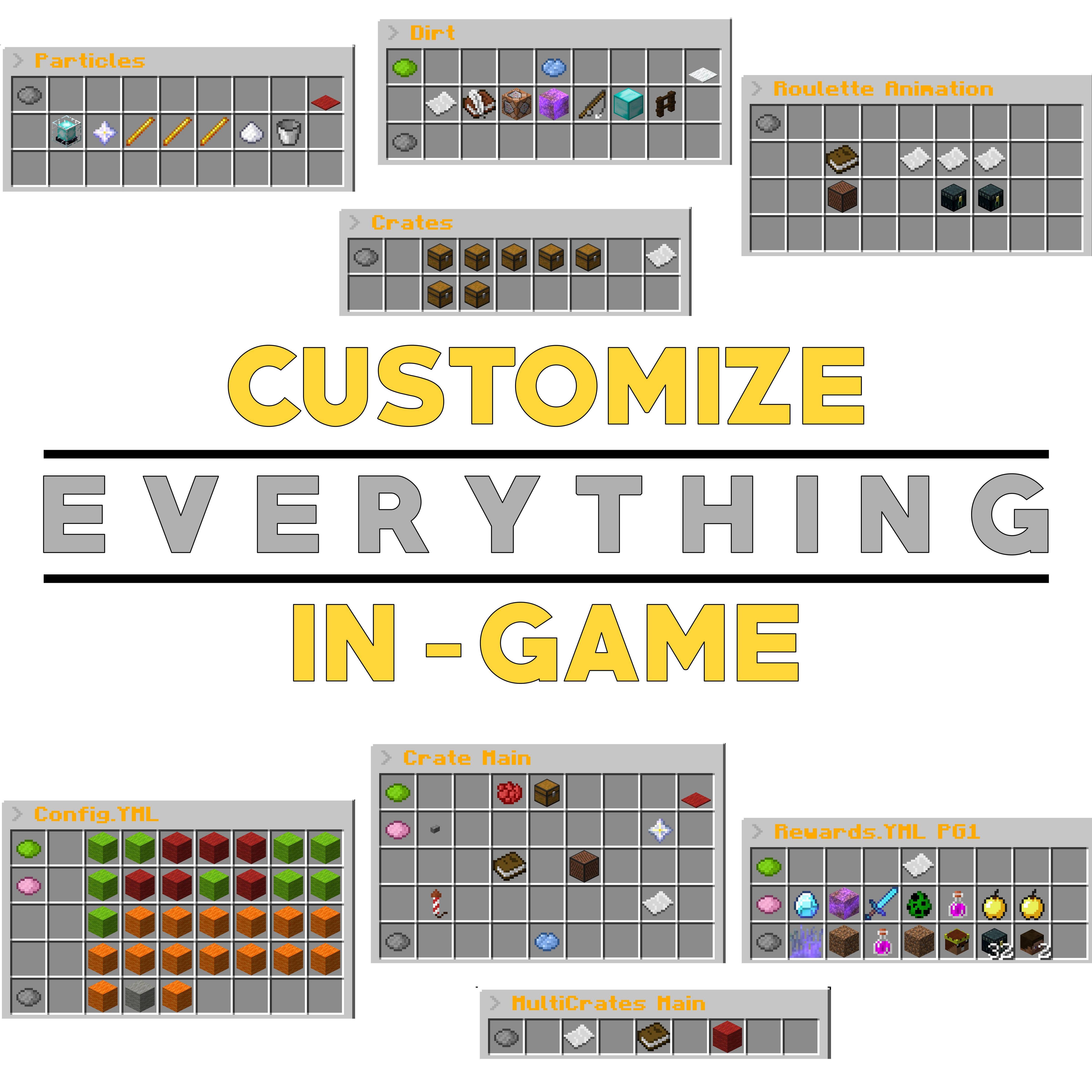 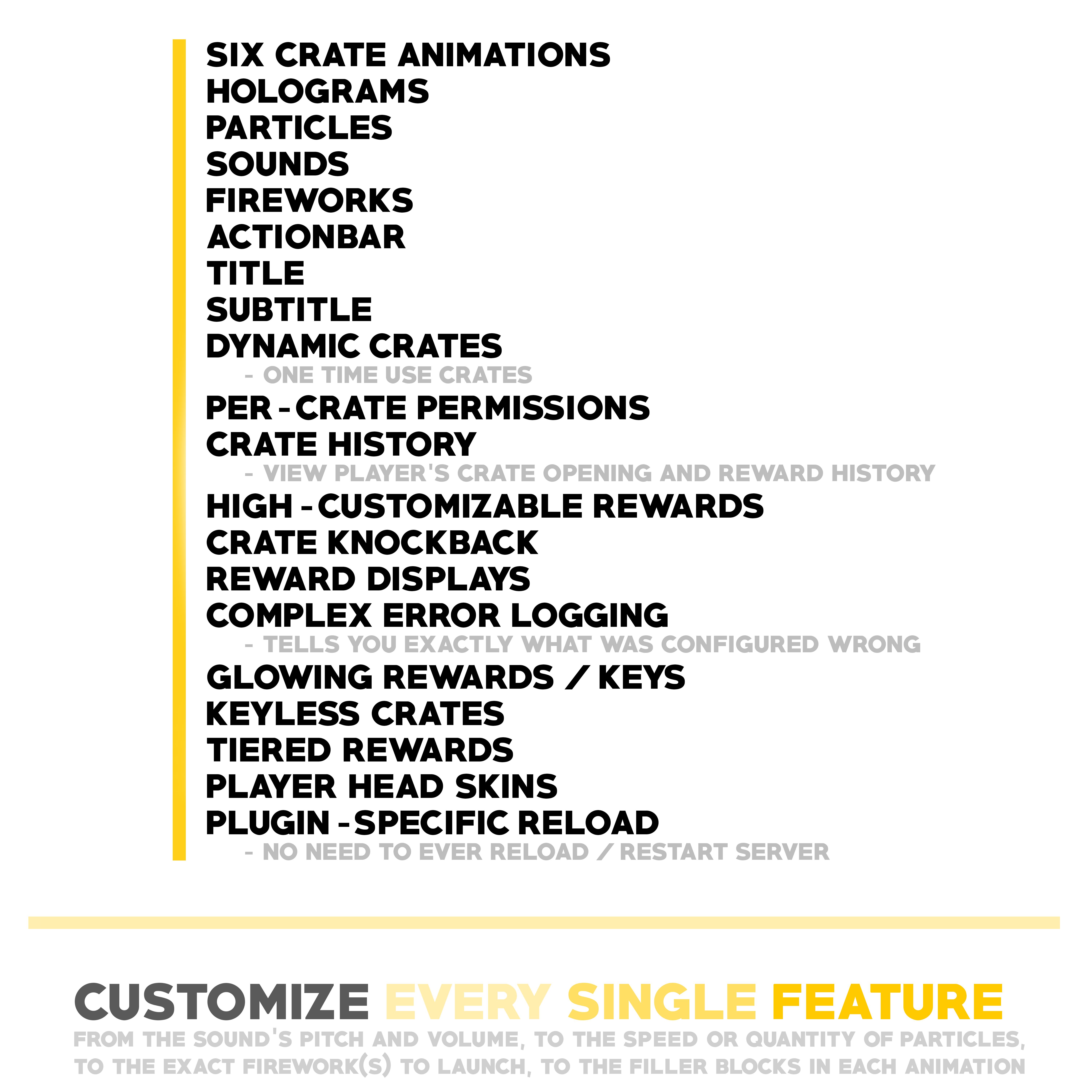 Help, bug reports, feature requests, and general chat!
(I DO BASICALLY ALL SUPPORT THROUGH DISCORD)

REQUIRES THE HOLOGRAPHIC DISPLAYS, HOLOGRAMS, or CMI FOR CRATE HOLOGRAMS AND REQUIRES CITIZENS v2 FOR ALL NPC CRATES.

All previews seen below are all CUSTOMIZABLE
Crate Animations
Open

Mine Chests (Lucky Crates) and MultiCrates
Mine
Mine Chest

Also, if you want cool holograms that cycle through rewards, check out this cool addon made by GamerDuck123 for all the main crate plugins!
https://www.spigotmc.org/resources/new-crates-hologram-addon.69989/

If you need setup help, don't hesitate to ask on the Specialized Crates discord! https://discord.gg/sFSSRzv

Setup Videos / Articles
Config
YouTube in-depth setup videos playlist
Custom Crates WIKI
All Config Files (For Previewing what you can config)
All
All
All Default Config Files
All Default Crate Files
All
All
All
Honestly, I'm pretty open to whatever just please don't be a jerk about it. If you didn't like the plugin and want a refund, don't chargeback just shoot me a message and I'll see what I can do. If you purchased the plugin more than 6 months ago then I probably won't refund it because come on, it's $8 and you've had it forever. Also, please don't steal the source code - feel free to look at it and modify it for your own server but don't redistribute it, please.
[/spoiler][/spoiler]
No ratings yet
about 5
Supported MC Versions
1.8, 1.9, 1.10, 1.11, 1.12, 1.13, 1.14, 1.15, 1.16
Basic Commands
/keys, /rewards, /scrates

Whenever someone gets this resource using your special link, you'll earn $0.76! (1)
Want to earn money by sharing this resource?