The most powerful AntiCrash plugin for SPIGOT server. Must-have for every spigot server!


Overview Discussion Reviews Updates Materials
We are not an official Minecraft product and are not approved by or associated with Mojang
You can test it on my own server: hubplay.pl with 500+ players. Works perfectly, used by 500+ servers.
OUR DISCORD:  https://mc-protection.eu/discord (6,5k members)
SpigotGuard - the best protection for your spigot server.
THE BEST WAY TO SECURE YOUR SERVER.
Supported versions: 1.7.x, 1.8.x, 1.9.x, 1.12.x, 1.13.x, 1.14.x, 1.15.x, 1.16.x, 1.17.x
Supported software: Spigot, PaperSpigot and other forks.
No dependency! Just move it to plugins folder and let it fix all crashers & exploits!

Just put spigotguard.jar into your plugins folder and everything will work like before - but.. every crash clients will be blocked, 0 lags caused by hackers/cheaters that wants you to pay money for stop crashing or buying their anticrash for 100$. Choose the best protection and solution.

Already about 500+ servers use SpigotGuard, customers trust us since a very long time, if there is any new crasher - we fix it as soon as possible. SpigotGuard is asynchrously and packet-based which means it operates on very lightweight level and blocks every crash packets even before they are processed by your spigot server which means no lags. Servers with 100+, 1000+ and even 10,000 (on whole network) players are using SpigotGuard on their networks! I can easily prove that in private message by giving you big servers ip that are already using SpigotGuard. It's lightweight but.. it's also the most advanced AntiCrash on the market with a lot of crash & exploit checks. You can ask your enemies to attack our test-server

Features & advantages
- Very lightweight, no dependency required, we have our own packet api for packet listening.
- Blocks every crash clients, no bypasses
- A lot of NBT and SPAM exploit checks
- Your server works like before but... every spigot crasher is fixed!
- Very often updates! New features, patches, are being added very often!
- Simple management menu where you can reload configs, see who tried to crash server in last time etc..
- Default config is perfect, it shouldn't have any false positives but if it has... you can easily eliminate this false positive with our great spigotguard's menu under    /spigotguard, it tells you how to fix false positive/detection. If a player reports you that he got kicked because of SpigotGuard, you can easily check why he got kicked thanks to /spigotguard [player name] and eliminate false detect in settings.yml!

Why SpigotGuard is the best on market?
- Other anticrashers are poor. Why?

How to install?
- Just move the .jar file to the plugins folder and restart a server, the default config is the best without false detects! Message me on discord: yooniks#0289 to get your license key after purchase!


Contact:
Licensing
To get your license key, you have to join our discord server, or we can consider giving you version without licensing after contacting us on discord. https://mc-protection.eu/discord

Test server: hubplay.pl - feel very free to test your crash clients there - my own server with 500+ players!
Reviews & feedbacks from another website: (and much more reviews, + we have about 500+ spigotguard users on our discord) - SpigotGuard  is already used by 500+ servers, including networks with over 5,000+ players! 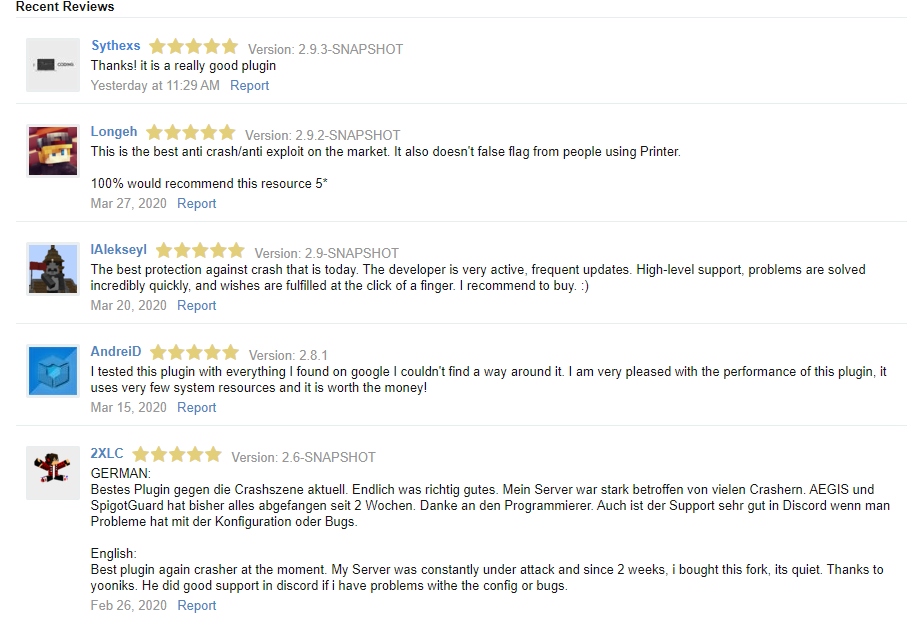 Michall Aug 25, 2020
Version 5.3.1 BULLET-PROOF
Very good plugin. Blocks all exploits I have tested. Highly recommend if you are having trouble with people trying to crash your server.